I'm in a rush today so I'll just post the poem and you can tell me what you think.

I AM YOUR RADIO
I am your radio,
time to get up,
hey kid, wake up,
time to go.
Put your feet
upon the floor,
move your body,
walk out the door.
Go to the bathroom.
I'll play for an hour.
Feel the warm rain
as you shower.
Come on, move it.
Lot's to do
while I'm thinking
lucky you.


Off to school, away you go
get your books, move quick..
I'm your radio, I'm your radio.
Still here playing music.

In my children's poetry critique group Judy Gamble challenged us to write a poem in two voices this month.  I thought you might enjoy a revision of an earlier poem, written for two people to read the parts.

Said Big Monster Dave
to Little Monster Joe,
Here is something
you should know
if you're going to bake of stew.
This is what you should do:

Put on a pot
Will a big one do?
Fill it with water,
A gallon or two?

Toss in salt, herbs and peppers mild
Then throw in a kid.
A tender young child?

When I taste it will it be yummy?

If the pepper is too strong,
it will tickle your tummy.

Is that it? Big Monster Dave,
asked Little Monster Joe.
Are these all the things
a monster should know?

No Little Joe, don't be so quick.
There is one thing more or you'll get sick.
Take care in eating this yummy stew.
NEVER EAT KIDS FAST.
Eating children quickly
will
give
you
GAS.

I hope you have a great weekend.  I'll be at the Young at Art Festival at the Poetry Center in Tucson.  Come join the fun if you're in town.

This poem is especially for Joan Edwards, Queen of the Butterflies.  It is a form poem called a FIB.  A fib is a mathematical poem  (like haiku or cinquain) based on Fibonacci's number.  The number of syllables in each line is added to the two lines before so that this little six line poem has one syllable in the first line, one in the second, two in the third, three in the fourth, five in the fifth line and eight syllables in the sixth line (1/1/2/3/5/8). 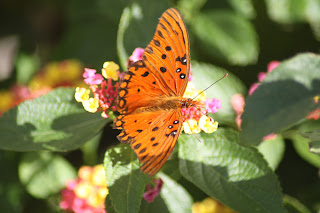 BUTTERFLIES
Spring
time,
flitting
butterfly
lines up to eat lunch
from the sweet lantana blossoms.
I hope you see lots of butterflies today.
Posted by Joy at 6:01 AM No comments:

Herstory in an acrostic

So, here is another one, I had fun doing the research.

HEROINE
Witch? Enchantress?
Stop to consider
that she was
Just 17, the Maid
of Orleans, she was
attired in white armor
nudged by heavenly voices, she
ordered her sword from St. Catherine, the rust
fell away from its five emblazoned crosses.
Accompanied by her mother
and brothers, she offered
reverence to King Charles, this virgin
covered in saintly blood.
She foresaw her death--
a green girl like white powder
smoking in fire.
Posted by Joy at 10:39 AM No comments:

History in an acrostic

I wanted to spend more time with acrostics and thought you might enjoy this one.


Coming from Lisbon to Palos, he carried his small son Diego


High on his shoulders


Requiring aid for his adventure, he left the boy


In the arms of a priest, entrusted his motherless


Son, while he walked on to Cadiz.


To meet with King Ferdinand and Queen Isabella


Perched on her sofa, waiting for Moors to end their war.


He wooed the queen to his thinking,


Eventually he got tired of waiting, was


Ready to Leave. He started toward


Cordova to meet his mapmaker


Older brother Bartelomew in France, at


Last, just six miles out, he was way-layed,


Urgently pressed to return. The Queen


Made Christopher Columbus a commissioned


Sail on a voyage to discover the World.

I had never thought about Christopher Columbus having a young son until I started doing research for this poem.  His wife had died and he was left with the care of the boy.  He and his brother were both map makers.  Their teacher Amerigo Vespucci, is the inspiration for the name Columbus gave to the new country.  And have you ever thought about those three ships?  Christopher Columbus captained one, his brother Bartelomew was on another and that young son was traveling on the third little boat, La Nina.
Doing research to write acrostics is fun and an interesting was to present your information.
Posted by Joy at 11:03 AM No comments: 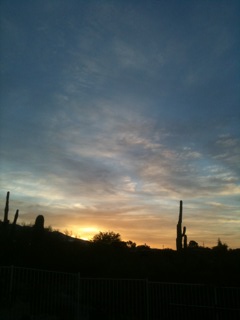 Good morning.  Happy Monday.  May this be a great week for you.  I was up to see a spectacular sunrise.  I wrote this spine poem, long and tall like the saguaro cacti with arms reaching upward in praise.  (Yes, there is a pun in writing a spine poem with cacti in it.) Each short line causes the reader to slow down and pause before going on to the next line.  Once I read a spine poem, I always like to try reading the poem from the bottom up to see if it still makes sense.  This one works fairly well.
Did you notice the alliteration?  (black, becomes and soar, saguaro, sing) Alliteration is the repetition of an initial consonant sound. I like to think of alliteration as the opposite of rhyming.  Rhyming is when the ends of the words sound the same, alliteration is when the beginnings sound the same.
Posted by Joy at 1:48 PM No comments:

I hope the sun is shining where ever you are.
When I was a little girl, I used to get a new dress and shoes for Easter Sunday.  Easter was the day we could start wearing white shoes again.  So I thought you might enjoy this silly poem about shoes.

I love shoes
in every shape and size.
I think my shoes are
a humdinger prize.

I have high heels of pink,
and sandals in blue,
bunny slippers, roller skates,
and galoshes too.

It is a beautiful morning.  I saw another dead snake on my morning walk.  This time it was a young Western Diamondback rattle snake.  The birds were especially noisy this morning, calling to one another and I saw several rabbits.  It is spring and a lovely time in the desert, unless you have allergies.  Here is a silly poem about that.

ALLERGIES
Mary Lu Longshoe didn't know what to do.
Every time she sneezed
AHH-CHOO!
She used another tissue.
She threw the tissue on the floor,
Stacked up piles behind her door.
Tissues in her closet, too,
Each time she sneezed
AHH-CHOO!
AHH-CHOO!
Tissues were packed tall on her bed
Piled so high they covered her head.
Tissues totally covered the chair.
No one could tell Mary Lu was there
Except for her muffled
AHH-CHOO!
AHH-CHOO!
I hope you don't have allergies, but if you do write a poem about it.  Have a great weekend.
Posted by Joy at 9:09 AM No comments:

Happy Good Friday and Happy Earth Day.  Today I have an acrostic poem for you.

Earth
Air
Rivers
They need our
Help to remain clean.

Don't kill our one precious earth
And do all
You can to make a difference.


Did you know that acrostics are one of the oldest forms of poetry?
Posted by Joy at 11:01 AM No comments:

SNAKES IN THE ROAD

On my walk this morning, I saw a dead snake by the side of the road.  I picked it up with my grabber stick and tossed it into the bushes hoping some animal could possibly eat it.  It did get me thinking.

Snakes in the Road

On full moon nights
when the light is bright
snakes crawl out on the road.

Night air may chill
the road holds them still
heat-seeking comfort is there.

Their scales gleam and glow
shine in an eerie halo
making a beautiful sight.

So if you're driving by
look with a keen eye
for their sparkling show on the road.

If you see a snake, please don't kill it.  Many snakes aren't poisonous. Snakes are more frightened of you, you're huge, than you are of them.
Snakes help to keep the rodent population down.

Have you ever written a poem about a snake?  Was it sneaky in some way?  Did it hiss?
Perhaps you could write a concrete poem in the shape of a snake.
Have fun writing.
Posted by Joy at 3:50 PM No comments:

I went to the Pima County Fair yesterday.  I had a great time watching the judging of the 4-H kids handling their pygmy goats.  In the school art display I saw some great photographs students had written haiku to describe the photo.
What is your favorite thing to do at the fair?  Make a list of ten things, then pick one.  Can you make a list of details for that one thing?  Try using all of your senses.  Can you include one simile or metaphor--Riding the elephant felt like jogging on a bumpy road, the Ferris wheel  is a cruise on the back of a swan.

When I was in third grade I wrote this poem about the fair:

I remember my mom wasn't any where near as happy as I was about my winning.